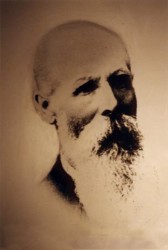 The following is from Memories from Childhood by Solveig Riktor:
Charles Jensen was born and grew up in Hvitsten.  He and his siblings became fatherless at a young age.  His father was a skipper (captain) and perished at sea.  It was like so many people’s destiny in those days.   It was not easy to be a widow as in the present, and she  was alone with many responsibilities.  Charles was happy with his mother and felt love for her.  He began as a house painter’s apprentice.  They lived in Hvitsten, but he was a house painter’s apprentice in Drøbak.  Each weekend he traveled home to his mother, but when Sunday was over, he had to go one bumptious mile (metric) back to Drøbak.  He had no money to travel both directions daily.   Each day he purchased 1 liter of fresh milk.  He poured the milk in a platter and let it stand until the next day.  Each morning he skimmed cream and accumulated it in a little pail.  This way he had a little pail of cream for his mother when he came home on Saturday.  About summertime he had to stop (because of the heat).  Yes, an old story relates that he was loving and inventive.  Grandmother told me this when I was a small girl.  It was a touching story of a young boy.

Grandmother and grandfather were two active people.  According to what I have been told, they were the first persons in Drøbak that took photographs.  They had a large camera that stood on a stand.  They did not use film, but special glass plates.  Grandmother took photographs of the children from the time they were small.  They started about 1880 and forward.  The Drøbak book has many photographs that were photographed by Charles Jensen.

Grandfather was an accomplished landscape artist.  The famous Norwegian artists, such as ChristianKrohg, Ludvig Skramstad and Edvard Diriks, encouraged him to open an artist’s studio, but he was too modest to do so.

Heritable family names (surnames) were generally adopted rather late within Scandinavia. Nobility were the first to take names that would be passed on from one generation to the next. Later, clergy, artisans and merchants in cities took heritable names. Family names were still used together with primary patronyms (father's name plus an affix denoting relationship), which were used by all social classes. This meant that most families until modern times did not have family names. Scandinavian patronyms were generally derived from the father's given name with the addition of a suffix meaning 'son' or 'daughter'. Sometimes the family name of the mother would be given to the children if that name carried status or an inheritance came from the mother's side. The names of family farms or other place names were also used. A nobleman had the right to write himself to (Norwegian: til) the seat farm(s) or the estate(s) on which he resided, for example ‘Hans Kaas til Rostrup’.