Like her husband, Charles, Valborg was artistic and loved painting and photography. It is said that they were the first people in Drobak to own a camera and she took photos of her children from the time they were small. Valborg enjoyed painting portraits, preferably of people she knew. She also ran a private school for some years and was considered to be an accomplished educator.

Furuly was a lovely locale.  It lied dense up to pine trees and bordered the farm Tverkegla, that neck of land of the family Brown for many generations. The gardens at Furuly were divided in two.  The top part was planted with berry bushes and in the lowest part of the gardens was fruit trees.  So widely I can remember the varieties of apples and plums.  In the gardens was also a big pond.  Idyllic it was, but I was most interested to lie flat on the ground near the pond and capture tadpoles, in my hand.  That part of the gardens was an enclosed yard with the gate locked.  We children did not go in there without one of the adults.   Partly for the pond sake, but grandfather carefully tended his fruit there also.

My mother remembers her middle name as Marie, not Sophie, but the baptism record indicates it is Sophie.

Note: Many of the memories of Valborg  come from a booklet called “Memories From Childhood and A little of the  Family of Solveig Riktor” written by her granddaughter. 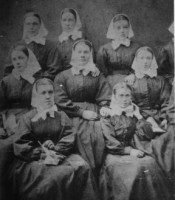 Article about a painting of the Jenssen home, Furuly, by Valborg Larsen Jenssen